I have not been around these pages for a while.  I apologize.  I have missed you.  The only explanation I can offer is it’s summer (I absolutely love summer and am savoring every last moment of it).  Anyway, here is my sermon from yesterday ….  –PP 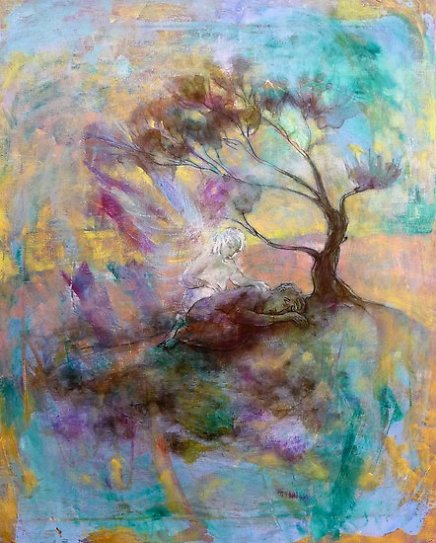 [Elijah] went a day’s journey into the wilderness, and came and sat down under a solitary broom tree. He asked that he might die: “It is enough; now, O Lord, take away my life …” 1 Kings 19:4

It is enough.  Elijah has had enough.  He cannot bear another day.  He cannot take it anymore.  There is something familiar about this scene; something we recognize.  We have seen this sort of depression: in ourselves, in others.  Elijah is not simply tired or discouraged.  Elijah has reached the point where he can no longer bear the thought of another day.  He collapses under the weight of his despair, right there where he is, a day’s journey into the wilderness, there beneath a solitary broom tree.  He cries out to God for release, for death.  Elijah welcomes sleep.  He wants only for his life to be over.

Yes.  There is something familiar about this scene.  According to the World Health Organization, there are 350 million people worldwide who suffer depression.  And, contrary to what we might suspect, depression is not just an American problem, or even a western problem, depression and anxiety exist in every country of the world.   According to the available data, 5% of the world population has experienced depression within the past two years.  That’s 1 in 20, and those numbers don’t even take into account the hundreds of thousands of occurrences that go unreported because of the stigma of mental illness.   Chances are either we, or someone we love, has sat beneath that broom tree.  Elijah’s despair is painfully familiar to too many of us.

Two weeks ago, a woman collapsed into her despair and fell to her death from atop Caesars Hotel and Casino in Atlantic City.  She was a bright and beautiful young woman, a wife and mother, the foster daughter of a friend of mine, and someone who had struggled with depression her whole life.  This was certainly not the first time someone within my circle of acquaintances had taken his or her own life, but this one was close.  The obituary did not report the cause of death, only that the woman’s death was unexpected.  It was heartbreaking to get that phone call and the memorial service was nearly unbearable.  So many unanswered questions.  So much pain.  Family members tried to speak, struggled to lift up and celebrate this woman’s life, and the minister did a commendable job of witnessing to God’s unconditional love in Christ; but it was hard.  Even for this pastor, it was hard.  The harsh reality of this woman’s death still presses heavily against my heart.  Did God not see fit to send angels to minister to her in her distress?

In the days since, I have found myself thinking of little else.  I have wondered what I might have said, had I been the one asked to preside at that service.  I have searched the scriptures and brought the whole of my faith to bear against what appears to have been the absence of angels beneath the broom tree that overshadowed that woman’s life.  There are no answers and I hesitate to speak with certainty about anything, but I kept coming back to one story in particular—about how the devil taunted Jesus to leap from the pinnacle of the temple for surely God would send his angels to bear him up in their wings.  True as that may be, Jesus does not jump; he does not test God.  But I’ve been thinking about those angels and their wings and that is where I have located my hope in the face of suicide—the angels do come; somehow, somewhere, in those moments between suffocating despair and death, the angels come with heavenly bread.

Anyway, that’s how I see it.  The bread that comes to us from heaven, comes as sustenance, yes; but it is primarily a sign and a promise.  For the Israelites who cried out in the wilderness, complaining against Moses and fearing they had been led into freedom only to die from hunger, God says No and rains down bread from heaven; food to eat and the assurance that God has not and will not ever abandon them.  When Elijah collapses beneath the broom tree, weary and spent, ready to surrender to death, God sends his angel to minister to him: a cake appears there on the ground before him, a sign that he was not then nor ever will be beyond the love and grace of God.  And when Jesus has compassion for the crowds and provides loaves and food for thousands, he does so as an expression of his own self-giving.  They came hungry and were fed, but the sign ultimately points to the one sent by God whose own flesh was to be bread for the life of the world.

Once the sign, the bread, has been pressed into your hand; once the promise has been sealed upon your heart; there is no way out, no way to escape the grace and mercy of God.  No peril nor hardship nor sword.  No height nor depth.  Not even death, itself.  Nothing in all of creation can separate one of us from the love of God in Christ Jesus our Lord.  It’s madness, really, to believe such a thing.  That God loves us that much; that God has claimed us forever; that we are his and Jesus gave himself that we—you and I—might come to his table on this warm August morning and taste the sweetness of the promise.  I have seen the wonder of that promise realized in the faces of those who have taken the bread in eagerness and in tears.  In that moment there is nothing except Jesus, his self-giving love, and his promise:  broken and given for you and for me and forever.

Just this past week, I finally got around to seeing the movie, Selma.  I’m like that; it sometimes takes me a short forever, but I do try to keep my thumb on the pulse of popular culture.  Anyway, the movie wasn’t nearly as good as the hype, but it did raise a disturbing question:  would I have marched?  Would I have been willing to submit to beatings and scorn and possibly even death to stand up for something I believed in, for what I felt in my bones was God’s will?  I could not answer that question.  The year is not 1965; this is not Alabama.  But I also know the question is not limited by time and space and circumstance.  Would I march?  I stand before you this day forced to admit I probably would not.  Shucks, I have a hard time speaking up when someone starts making judgmental and disparaging comments about another member of the community.   I know I should say something; but I don’t.  So, no, I don’t suspect I would have joined the thousands who marched from Selma to Montgomery.

We all fall short of the Glory of God.  Each and every one of us fails miserably at giving full expression to the hope and faith we have in Christ.  We have good intentions, mind you.  But our feet hold us fast and our voices fall silent.  We are forever chasing after distractions to keep our minds occupied and away from thoughts of justice and poverty and racism and Jesus and life and death.  Even those of us who come to church on Sunday morning, often have the darnedest time lingering in the promise; claiming it for ourselves.  Five thousand people ate their fill on the grassy hillside across the lake.  Some went home.  Some followed.  All fell victim to doubt.  Who is this one who claims to be sent from God?  Bread of angels?  Bread of life?  We scan the landscape of our lives and cannot, for the life us, recognize the sign.  Oh, if only we could.  We wonder, briefly, what it would be like to rest on the wings of angels and trust God above all things.  And then our thoughts run off after some thing or another and we find ourselves frantically chasing we know not what.

As I watched that movie, I found myself profoundly moved by the moment when Dr. King and the crowd behind him, all kneel down in prayer, right there on the bridge; pausing in the presence of God; open to a sign.  I was reminded of the friends and family who gathered in silence trying to reconcile their often fragile faith with the inescapable reality of desperation and despair, daring to hope for some word of comfort.   Not unlike the crowds who stood in the very presence of our Lord and still could not recognize the sign, I thought about how we, too, hesitate to trust what is right before us, in our hands and on our lips.  The body of Christ, given for you; for me.  Bread from heaven.  Bread of angels.  Bread of Life.  Broken and pressed into our hands.  Take.  Eat.  Otherwise, the journey will be too much for you.  The promise is so outrageous, the possibility so incredible—forgiveness, mercy, sustenance, life—given for me, for you; restoring our strength; giving us life; right here, right now, lifting us up on the wings of angels.

Come to the table, beloved of God.  Touch the promise to your lips.  Dare to taste and see.  The Lord is oh, so good.  Amen.

Image: Elijah Under The Broom Tree/pic2fly.com

Blogs Beyond the Brine

I'm on a path. It meanders.

Trying to feel better and get things together. Focusing on sobriety and truth.

What Inspires Your Writing?

A blog dedicated to writers...and the people, places, and things that spark their creativity

The role of the artist is to not look away. - Kurosawa

the liminal life of m

A blog full of humorous and poignant observations.

A small dog in The Big Apple

Alcoholism recovery in light of a Near Death Experience

Message in a Bottle
The Soberist Blog

a life in progress ... sans alcohol

We Admitted We Were Powerless

A journey of recovery

Tired of Thinking About Drinking
Aging Gracefully My Ass

A sincere blog about a donkey

Pay attention. Be astonished. Tell about it.

the last day one, one day at a time

Better a witty fool than a foolish wit ~ Shakespeare

Ann Kroger
Our LIFE - in the moment

Finding and practicing grace in recovery

How I Secretly Quit My Secret Habit of Secretly Drinking

The Art and Craft of Blogging

The latest news on WordPress.com and the WordPress community.