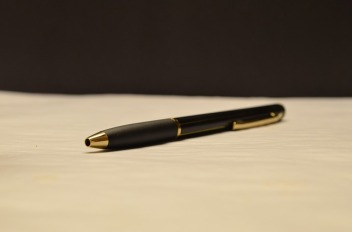 When it came to Christmas cards, my mother would have made the marketing folks at Hallmark proud.  Of course she loved receiving cards, but she was also borderline obsessive about sending them.  One year, I remember her mailing off a photograph to some company she found in a catalog.  Her cards came back with a pen and ink drawing of our house on them.   I thought that was a little over the top.  I mean, I liked our house and all, but the idea of my friends’ parents getting a card with a picture of our house on it mortified me.  Why couldn’t we be like normal people and send Christmas cards that looked, well, at least Christmassy?  There was no arguing with my mother, though.  Christmas cards were her department and she was in charge.

She kept track, too.  In a book.  Page after page of addresses and columns and check marks.  Name.  Year.  Sent.  Received.  She often talked about cutting her list back, about not sending cards to the people she hadn’t received a card from for a while.  She never did, though.  If your name was in her book, you got a card.  Unless you died that year, in which case she would neatly draw a line through your name and tuck your obituary inside the back cover.  Yes, her Christmas card book was her go-to for all sorts of information.  Addresses.  Birthdays.  Death notices.  You name it.  If she thought it was important, it was in that book.  Looking back, it was most probably symptomatic of some sort of addiction disorder, but at the end of the day, no one could say my mother wasn’t organized.

It didn’t stop there, either.  You’d think by the time the tree was down and the decorations put away my mother would be over the whole Christmas card thing.  She wasn’t.  For days after, she’d sit down at the kitchen table to look through her cards just one more time.  “Don’t you want to see my cards?” she’d ask.  I dutifully would sit down next to her and try to appear interested.  “Yes, Mom, that one does read nice.”  “Yes, Mom, it is a beautiful picture.”  And so it would go.  She’d read and reread those cards well into the spring.  Eventually she threw them away.  She had to, because every year there was a new bundle.  Stockings and snow and the baby Jesus all wrapped up in a ribbon. Tangible reminders that people remembered her, that something she said or did in her life mattered.

I don’t have a Christmas card book.  Never did.  But I do keep track of who I send cards to.  There is, you see, a key to my address book.  This year’s designation is a solid circle.  Not to be confused with the empty circles, x’s, and check marks of years past.  If an address entry has a circle colored in next to it, I sent a card this year.   Now, I realize such a system may very well make the case for there being a genetic predisposition to addiction, but my Christmas cards are all done.  Sealed and stamped and ready to go, with corresponding 2014 orbs noted in my address book.   I’m not sending to everybody, though.  Stamps have gotten expensive and too much has happened in my life this past year to risk raising unnecessary curiosity.

There’s no way I could write one of those inane enclosure letters.  And say what?  “It’s been an interesting year?”  “I lost my job, spent 30 days in an alcohol rehab, and followed up with an intensive outpatient program?”  Sure, I could go on about having been sober for nearly four months now, how AA has become an integral part of my life, and that I’m feeling more alive and hopeful than I have for years.  But I know people wouldn’t read that far.  They’d get hung up on the rehab part, the same way traffic slows down at the scene of an accident.    I’m just not going there.  There’s no reason to clutter up my holiday with a bunch of well-meaning phone calls.  The only people who are getting cards from me this year are those who either already know or don’t ever have to.

I am aware not everyone sends Christmas cards.  There are people who think a “Merry Christmas” status update on Facebook suffices for a holiday greeting.  But I’m not one of them.  For me, cards will always be an unavoidable necessity.  I  have relatives in the don’t ever have to know category who would think I died or something, wonder why they hadn’t seen my obituary, and neatly cross my name off of their own lists.  Some cards simply have to be sent and I am hoping to at least get a few back this year.  More than ever, I need to be reminded there are people who remember me, people for whom something I said or did in this life mattered.  I know it’s ridiculous.  You can’t judge your value as a human being on how many Christmas cards land in your mailbox each year.  But I can’t lie.  I do.  I am, after all, my mother’s daughter.

Blogs Beyond the Brine

I'm on a path. It meanders.

Trying to feel better and get things together. Focusing on sobriety and truth.

What Inspires Your Writing?

A blog dedicated to writers...and the people, places, and things that spark their creativity

Author of Horror and Paranormal Fiction

the liminal life of m

A blog full of humorous and poignant observations.

A small dog in The Big Apple

Alcoholism recovery in light of a Near Death Experience

Message in a Bottle
The Soberist Blog

a life in progress ... sans alcohol

We Admitted We Were Powerless

A journey of recovery

Tired of Thinking About Drinking
Aging Gracefully My Ass

A sincere blog about a donkey

Pay attention. Be astonished. Tell about it.

the last day one, one day at a time

Better a witty fool than a foolish wit ~ Shakespeare

Ann Kroger
Our LIFE - in the moment

Finding and practicing grace in recovery

How I Secretly Quit My Secret Habit of Secretly Drinking

The Art and Craft of Blogging

The latest news on WordPress.com and the WordPress community.